Sen. Ed Markey and Congresswoman Ayanna Pressley spoke about their recently-filed legislation, the Freedom to Move Act, on Wednesday evening in Mattapan.

The Freedom to Move Act, which Markey and Pressley filed in late June, would allocate $5 billion in federal funds into a competitive grant program, known as Freedom to Move Grants, to offset fare revenues for transit agencies. It would also finance service upgrades including bus stop improvements, redesigned routes, and transit-priority infrastructure.

“What the legislation says, quite simply, is that access to public transportation is a critical need in our county and that for poorer people it is an absolute necessity. We need a plan to make sure that there is an accessible system in place for transportation,” said Markey.

He noted that a person earning $30,000 a year or less spends 30 percent of their income on transportation.

“This goes to just getting on and off busses and trains to get to doctors, schools, or work... that is absolutely unacceptable. Our goal is to make sure that we provide the federal funding that says to the cities that there will be funding that is sent to you so that riding the T is free,” he said.

The best way to make transportation accessible to all, he added, is to “just make it free.”

“We have a moral and economic responsibility to make sure that we make transportation accessible to everyone. The best way to do that is just to make it free. And providing transit equality will enhance our ability to provide health care, economic, educational equality because it’s all wrapped in together.”

Racial disparities and health inequities in the Massachusetts 7th “have everything to do with the lack of access to affordable, rapid, reliable transit,” said Pressley.

“Public transit is a public good. Black bus riders in Boston ride, wait, and transfer for an additional 64 hours a year in comparison to their white peers who ride the bus,” she said-- also noting a higher correlation with asthma rates in communities of color.

Pressley noted that during the pandemic, neighborhoods reporting higher rates of covid-19 cases are home to a higher proportion of essential workers.

“These are the same communities that have been identified as needing the most improvement in their public transit systems,” she said, “So we can’t talk about public transportation in our communities without acknowledging environmental racism and resulting health disparities caused by increased pollution in our neighborhoods.”

Pressley called the Freedom to Move Act a victory for Boston’s transit advocates.

“This is a victory for all of the advocates-- for our partner Michelle Wu, for the Greater Four Corners Action Coalition and for all of those who have been on the front lines of the transit justice movement. This is about investing and improving our public transit. Making it free, safe and reliable for our riders,” she said.

“Giving people the freedom to move, which is about self-agency and determination, on transit, to walk and bike on our sidewalks and streets, will not only reduce the harms, it will make our communities more live-able and more connected.”

Wu, who has taken a strong lead on transportation issues in her time as a city councillor, thanked Markey and Pressley, who she said, have “stepped up to move us toward what the community has been asking for for so long,” with the introduction of their Freedom to Move legislation.

“This is a part of the city where my constituents have to make unfair choices everyday. Transportation affects every aspect of our lives and how people connect with their healthcare, education, economic opportunity,” she said.

“If we are serious as a city and a commonwealth about closing the racial wealth divide, moving toward climate justice, truly empowering communities, we need to make sure that transportation is fare free. Public transportation is a public good and for every person that is able to get out of a car and afford to get onto a public bus or train-- that benefits everyone.”

Mela Miles, lead organizer for the Greater Four Corners Action Coalition and chairwoman of the Fairmount-Indigo Transit Coalition, called public transit a “lifeline” for many residents, along the Fairmount Line in particular.

“The very lifeline that you need to get to where you’re going is transportation. When we have the lowest automobile ownership per capita along the Fairmount corridor then that becomes an amenity and a participating factor to force people out of their communities and raise rents,” she said. 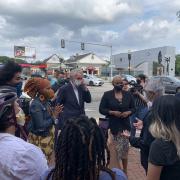 “We have a big problem when people start looking at transportation as something to be desired more than the people who need it so desperately. The one thing that people say they give up when they can’t afford transportation is going to their doctor.”

When asked where he gauges the probability of the bill passing, Markey said he was “very confident.”

“I’m very confident that next year we will have a bill that passes that deals with these issues... We’re going to be thinking big next year and we’re putting this on the table now,” he said.

“After Joe Biden is sworn in as President, and we control the Senate and the House of Representatives… we're looking for a way to recover from this economic and health care catastrophe that we are suffering from and the best way to do it is to pass a huge infrastructure bill and make sure that at least $2 trillion dollars go into that.”

“These are old fights but we’re in a new moment as a country and as lawmakers. The fact that now in the infrastructure bill there are investments in public transit-- this is something we’ve been pushing for,” said Pressley.

“We know to date, the federal formula when it comes for transportation has been antiquated, and has contributed to and driven these inequities that persist in Boston and throughout the Massachusetts 7th. We’re seeing unprecedented gains and this is the time.”