Last month, a group of students at the Kenny Elementary School near Adams Village raised more than $200 at a multicultural crafts fair, selling trinkets like Vietnamese paper dragons, Guatemalan weavings, and Grecian urns for five cents each. When it came time to donate the funds, the pupils in Tia Feuerstein’s second grade class had only one recipient in mind: the Dot Park goats.

After a successful “goatscaping” trial run last summer, a new crew of five goats set up shop in Dorchester Park this month with a fairly simple objective: Eat everything in sight. By putting the creatures’ healthy appetites to good use, Dorchester Park Association members hope to curb the growth of unwanted greenery, such as poison ivy and thorny bushes, that routinely invade some of the harder to reach areas of the park.

Signed for a cleanup contract through the end of the summer, the goats are already hard at work — much to the delight of the Kenny students, who took a field trip to the park last Tuesday to see them in action.

“They’re really cute,” said Adelaide Peck, 8, summing up her classmates’ feelings on the matter. “I just like watching them do stuff,” added another Kenny pupil, 8-year-old Monica Delci.

Dorchester Park Association board member Dave Mareira said he was overjoyed to hear the students wanted to give back to the community by donating their funds to the park’s goatscaping initiative. The goats’ presence in the park depends on contributions from friends and neighbors, he explained, describing the gesture as “beautiful.”

As the goats munched happily in the background, Mareira said to the students, “I want to say a big thank you to all of you for being our first major donors of the year. Thanks to you guys, the goats will be able to stay here in the park for longer, so that more kids and people will be able to enjoy them like we did today.” 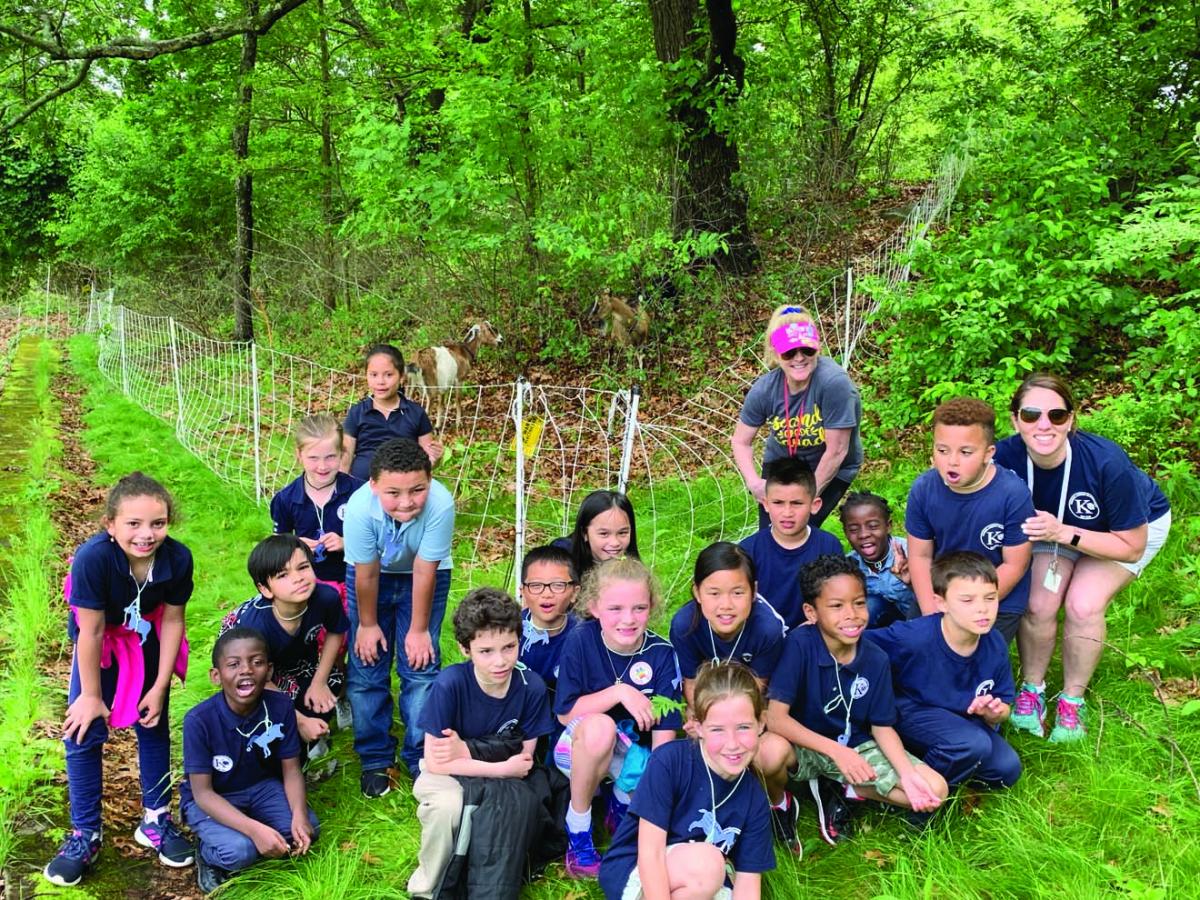 As an expression of gratitude, Mareira let the kids float suggestions as to how the new goats should be named; potential names included Oreo, Buttercup, S’mores, Little Billy, and, of course, Kenny.

Feuerstein said she saw similarities in how her students found common ground admiring the goats and in the way they responded to the crafts fair, a celebration of multiculturalism that came from “looking at our community of Dorchester and Boston and how we connect to people around the world who immigrate here.” Building a personal connection to the goats in Dorchester Park is just another way for kids to build community, she reasoned.

“It actually kind of reminded us of the spirit of the crafts fair,” she said. “The goats just brought everyone together.”